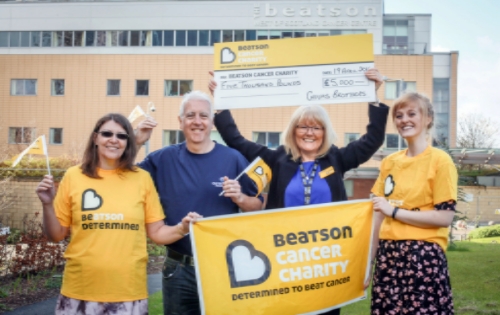 Chivas Brothers, the Scotch whisky and premium gin business of Pernod Ricard, is today awarding £5,000 to Beatson Cancer Charity, after employees from its Dunbartonshire sites voted in their droves to support the organisation.

Each year, Chivas Brothers’ staff select their favourite causes to support as part of the company’s commitment to build strong relations with the local communities where it operates. The Beatson West of Scotland Cancer Centre is an internationally renowned cancer centre and the busiest in the UK in terms of clinical activity and patient numbers. A £5,000 donation will support the charity’s pioneering work, which supports the 8,000 new patients and their families who attend the cancer centre every year.

“Alarmingly, more than one in three people are affected by cancer in the West of Scotland – the highest cancer rate in Europe. As technology advances and new treatments are developed, the demands on cancer services continue to grow so this truly amazing level of support is so vital in helping us to continue to provide funding and wellbeing services to enhance the wonderful care thousands of patients receive at The Beatson West of Scotland Cancer Centre and related facilities each year.

“All money raised will go a very long way in the fight against cancer, now and in the future and for that we are truly thankful.”

Jennie Norrish, Head of Communications at Chivas Brothers, said: “It is a great pleasure to announce that our employees have chosen to support Beatson Cancer Charity this year. We are dedicated to being a part of the communities where our employees live and work, and therefore to support this incredibly worthy cause that is so close to the hearts of our Dalmuir, Dumbuck and Kilmalid workforce. The Charity of the Year initiative is a great opportunity for Chivas Brothers to give back to our local communities.”

Three of the Chivas Brothers employees who voted for the charity recently visited the Beatson Cancer Charity Wellbeing Centre and were kindly shown around the facility by Joyce Ross.

Valerie McNamara (pictured) is an employee at Kilmalid manufacturing site in Dumbarton and said: “We’ve all been touched by cancer in one way or another and it’s very rewarding to be involved with such an inspiring charity. The work they do in supporting people at the most difficult time of their lives is fantastic.”

Catherine Cairns (pictured), also based at Kilmalid, added: “My reasons for nominating Beatson Cancer Charity are firstly because of all the help and support given to my boyfriend’s father and his family, before he passed away early last year, and also because it is so local – as I know others who share a connection with The Beatson.”

Another Kilmalid employee, David Moffat (pictured) added: “I have known and know too many family and friends who have had and are currently receiving treatment from The Beatson. I have witnessed first-hand how caring, dedicated and wonderful everyone connected with the centre is and that’s why when The Beatson was one of the nominated charities I opted for it.”

The donation to Beatson Cancer Charity forms part of a £20,000 contribution to four charities across the UK, each representing a region in which Chivas Brothers operates and includes; Beatson Cancer Charity, Dunbartonshire; Alzheimer Scotland, Northern Scotland region; Macmillan Cancer Support West of Scotland, Paisley, Glasgow and Ayrshire; and the Jake McCarthy Foundation, London and Plymouth region.

The annual charity vote is just one of a number of initiatives that Chivas Brothers’ employees can take part in throughout the year, including a ‘doubling-up scheme’ where the company matches funds raised for good causes by workers in their spare time.

Pernod Ricard is the world’s n°2 in wines and spirits with consolidated Sales of € 8,558 million in 2014/15. Created in 1975 by the merger of Ricard and Pernod, the Group has undergone sustained development, based on both organic growth and acquisitions: Seagram (2001), Allied Domecq (2005) and Vin&Sprit (2008). Pernod Ricard holds one of the most prestigious brand portfolios in the sector: Absolut Vodka, Ricard pastis, Ballantine’s, Chivas Regal, Royal Salute and The Glenlivet Scotch whiskies, Jameson Irish whiskey, Martell cognac, Havana Club rum, Beefeater gin, Kahlúa and Malibu liqueurs, Mumm and Perrier- Jouët champagnes, as well Jacob’s Creek, Brancott Estate, Campo Viejo, Graffigna and Kenwood wines. Pernod Ricard employs a workforce of approximately 18,000 people and operates through a decentralised organisation, with 6 “Brand Companies” and 85 “Market Companies” established in each key market. Pernod Ricard is strongly committed to a sustainable development policy and encourages responsible consumption. Pernod Ricard’s strategy and ambition are based on 3 key values that guide its expansion: entrepreneurial spirit, mutual trust and a strong sense of ethics.